What is “Double Dapple?”

What is “Double Dapple?”

Have you ever stumbled across a picture of an all-white Dachshund, or a significant amount of white on the puppy, or a Dachshund with extremely unique markings that is labeled as “amazing” or “rare”?  Chances are this puppy is a double dapple 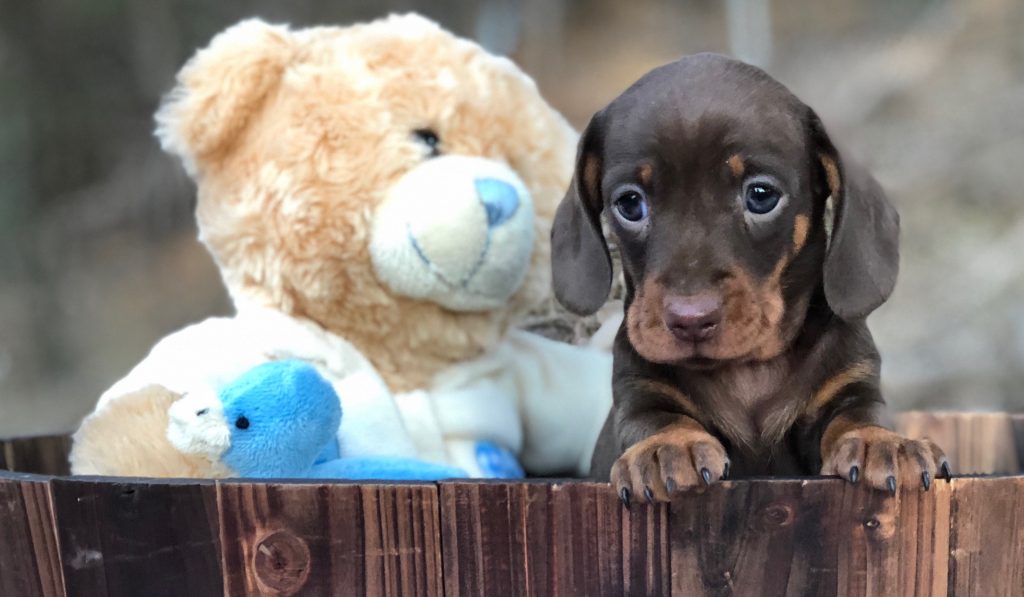 Dappling is a type of coat pattern, which is also sometimes referred to as merle in breeds other than dachshunds, and causes the coat’s pattern to be multi-colored and patched or spotty in terms of the color distribution, and can cause an almost mystical looking pattern on a dogs coat.  Genetics account for the dappling pattern on the dog, but the results can vary quite widely, even within pups of the same litter, and regardless of the coat patterning of the two-parent dogs.

If one parent dog is dappled in the pattern, some of the puppies are also likely to present with a dappled pattern, and when just one parent passes on the dappled color, this is not a problem but is beautiful.

However, if both of the parent dogs are dappled, they will both pass on the dapple gene, and the puppies will receive two copies of it; this is what produces puppies with the double dapple, and where the two dapples overlap on the coat, this produces a double dapple pattern.

The double dapple pattern is generally considered to look attractive and be desirable in and of itself, which leads some dachshund breeders to attempt to achieve this look within their own litters.

However, the two copies of the dapple gene pass on more than just the double dapple color; they also pass on a range of hereditary health problems to the subsequent puppies too, which we will now examine in more detail.

Why is double dappling a problem?

The dapple gene is a dominant gene, and when two dogs with this dominant gene are bred, they effectively cancel each other out to produce a recessive gene for white coloring, which commonly leads to problems with the eyes and ears too.

Double dapple breeds which have genetic abnormalities only add to these pre-existing propensities. Consciously breeding double dapples involves taking a risk which simply isn’t worth the potential pain and abuse which is passed on to the litter.

While not all double dapple puppies will be afflicted with health problems related to their coat patterning and the genes responsible for it, the incidence rate of associated problems is high enough that both The Kennel Club and the Dachshund Breed Council stipulate that two dapple Dachshunds should not be crossed with each other. Double dapple dogs fall outside of the breed standard for the Dachshund, as their color trait is directly responsible for potentially serious health problems.

Be Aware This is Not ALWAYS the Case. Some May Also be Due to an Extremely Rare “Piebald” Gene.

According to the American Kennel Club, Piebald is a pattern (as opposed to a color) with clearly defined areas and/or patches of white on any allowed one-colored or two-colored dogs.

Two-colored piebald patterned dogs may show tan markings on the face and around the anus. There are no patches of lighter shadings within the colored areas as in the dapple pattern.

Eye color, eye rims, nose, and lips are well pigmented and in accordance with the base color; Important note: eyes are never partially or wholly blue as distinguished from the dapple pattern.

What does this mean for Dachshunds and their owners?